I'm sure you will wish to join me in congratulating our colleague in the LA&PS Department of History, and our hard-working Chair, Marcel Martel on the recent publication of his book Canada The Good: A Short History of Vice Since 1500. 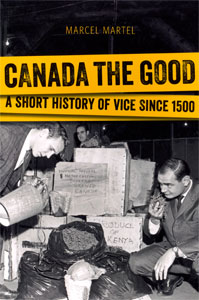 This is the description of the book as provided by Wilfrid Laurier University Press:

"To invest in vice can be a sound financial decision, but despite the lure of healthy profits, individuals and mutual funds have been reluctant to invest in this type of stock. After all, who would take pride in supporting the tobacco industry, knowing it sells a deadly product? And what social responsibilities do investors bear with respect to compulsive gamblers who have lost so much money that suicide becomes an attractive option?

Canada the Good considers more than five hundred years of debates and regulation that have conditioned Canadians’ attitudes towards certain vices. Early European settlers implemented a Christian moral order that regulated sexual behaviour, gambling, and drinking. Later, some transgressions were diagnosed as health issues that required treatment. Those who refused the label of illness argued that behaviours formerly deemed as vices were within the range of normal human behaviour.

This historical synthesis demonstrates how moral regulation has changed over time, how it has shaped Canadians’ lives, why some debates have almost disappeared and others persist, and why some individuals and groups have felt empowered to tackle collective social issues. Against the background of the evolution of the state, the enlargement of the body politic, and mounting forays into court activism, the author illustrates the complexity over time of various forms of social regulation and the control of vice."

On behalf of the entire department, sincere congratulations to Marcel!!

From YFile: New book explores history of some 500 years of vice in Canada